Sailing on the Inland Seas 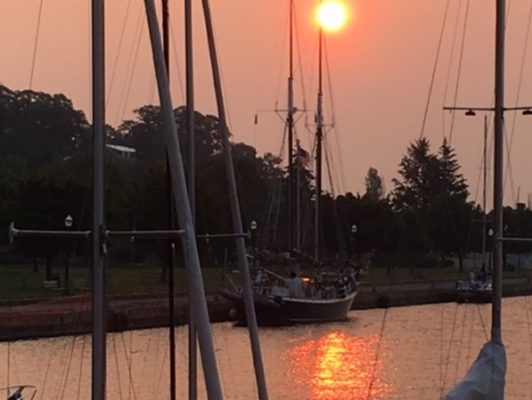 Tom Wenstrom and I arrive in Marquette, Michigan around 4:30 pm, thanks to Bob Hagerman and his wife for giving us a ride up to the Upper Peninsula. We will meet the schooner Inland Seas docked along the break wall in the harbor on Lake Superior. We are part of the crew exchange which happens quite frequently when the schooner is in away ports. We’ll join the crew, already on board, and will be moving the schooner across southern Lake Superior from Marquette to Sault Ste Marie.

I quickly stow my gear and walk into town with James and Rob to look for a place to eat dinner and we find a Mexican restaurant overlooking the harbor. James makes reservations for us and the rest of the crew that are still back at the boat. After dinner I walk through part of the town, stop at an ice cream parlor and head back to the boat. 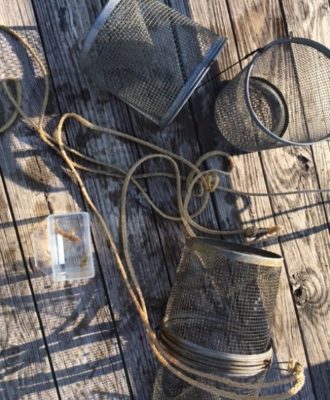 As I’m sitting on deck I notice a young family, father, mother with a small baby in her arms, and a small boy, slowly walking along the break wall towards us. They look at the Inland Seas as they walk by, but the boy stops and doesn’t move. He’s looking at the schooner, and his mother is trying to move on, but the young man won’t budge. I walk over to talk to them and try to start a conversation with the young man, but he is very shy.

The father then starts to talk to me about the boat and I start telling them what we do and about our mission and I notice the mother and father getting very interested when they discover we are different than other tall ship schooners. We are also, and more importantly, a science ship and a school-ship. They start asking a lot of questions and we end up talking together for about a half hour. I find this is a common occurrence while talking to families in away ports.

With all the electronic distractions that so easily kidnap young minds these days, it can sometimes be difficult to attract kids to science without something to grab their attention first and then keep it. A lot of children today live in cities and don’t have access to nature at a young age. Some have never even seen the Great Lakes before. A schooner is a good way to attract attention and bring them on board. But that in itself is not enough. They also need to immerse themselves in nature. 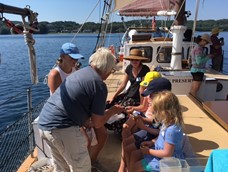 I have seen the change in children and the excitement when they are directly involved in the sampling and the touching, hearing, seeing and smelling the samples as they dig into the benthos with their hands; Or trying to catch a flopping fish when they try to put them on the measuring board; or watch plankton under a microscope as those tiny transparent critters dash across the screen in front of them.

Richard Loud, in his book “Last Child in the Woods” talks about this. He points out that many children today don’t even have the opportunity to play in nature and are suffering from what he calls a “nature deficit disorder.” It’s important that we realize that these same children will be making the decisions about the Great Lakes in the not-too-distant future. 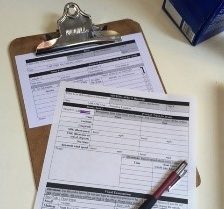 Science is ingrained in the culture aboard the Inland Seas. The captain and crew, the staff and the volunteer instructors all take it very seriously. Though we always try to adjust the message to the age group involved, and we all may have a different way of doing this, we are very careful to follow the guidelines so that all of our data is collected and reported in the same way every time. For this we use detailed data sheets that have been designed to provide useful data that can be uploaded to share with other organizations and that we can use to show changes and trends that we have discovered in the Great Lakes, and there are many.

The following morning, we awake to a deep red sun in a hazy sky caused by the smoke in the atmosphere from the fires burning up in Canada. I’m up early and sitting on deck with a cup of coffee, thanks to Jeanie our cook who gets up and makes coffee for us early risers. Jeanie is a really great cook and also takes care of our first aid needs by quickly patching us up and sending us back to work. I’m taking a few pictures of the sunrise when Jeanie says she is off to see the “fish monger.” Not knowing what this is, I just have to tag along. Juliana and I walk with her over to Thill & Sons Fish market in the harbor to get fresh fish for tonight’s supper. 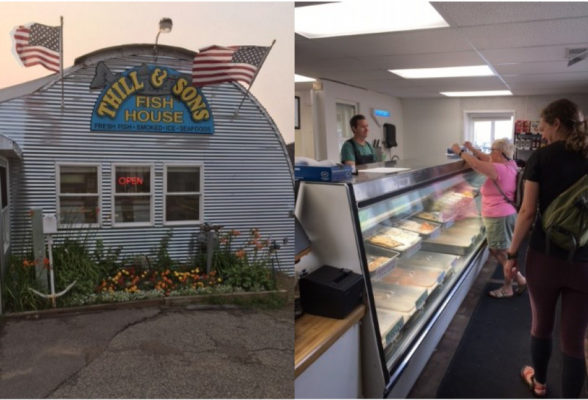 We leave Marquette harbor and head east across Lake Superior passing the Pictured Rocks National Lakeshore and the Grand Sable Dunes. We arrive in the small harbor at Grand Marias right at sunset. We drop the starboard anchor with chain and settle in for the night.

Another smoky red sun greets us the next morning. Captain Ben calls a meeting to discuss the day’s sail. He said since we have a fair wind this morning and it is from a favorable direction, we will sail off the anchor. This means we won’t be using the motor but will be putting up the sails and sailing out of the harbor like they had to do a hundred years ago. Jillian, who’s curiosity is always looking for a new place to sample, told Captain Ben she would like to take a microplastic sample while still in Lake Superior since we haven’t taken one here yet.

After our meeting our first mate Rebecca has everyone form two lines, one port side and one starboard side, to take turns at the windless. We take turns two at a time ratcheting in the anchor chain. The depth is about 35 feet deep here in the harbor and we have about 150 feet of anchor chain in the water. This is a good ratio, about 5:1, to allow the anchor to lay flat on the bottom allowing the blades of the anchor to dig in and hold us fast. The extra chain also acts like a large spring, allowing the boat to ride up and down with the waves without pulling the anchor off the bottom.

We continue bringing in the chain until we are now directly above the anchor. We then go to our stations and raise the sails. Immediately after raising the sails, we return to our lines and rachet in the rest of the anchor chain and secure the anchor as we sail out of the small harbor. What a site this must have been from the shore. Everyone knew exactly what to do and it was a thrill how everything just came together like clockwork. 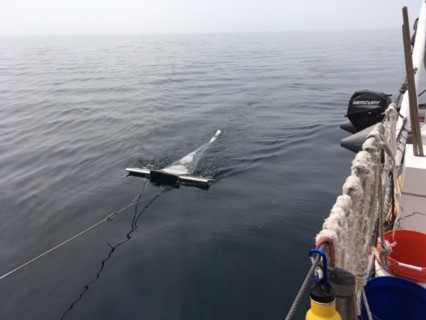 Early afternoon the wind started to die, and we were only making about 3 knots so the captain suggested we get our microplastic sample now since this is just the right speed for a good sample. We all gathered on the starboard side and launched the Manta trawl somewhere between Grand Marias and White Fish Point. We trawled for 30 minutes and then brought it back on board. Rachael, Amanda, and Jillian then spent the next hour processing the sample.

The sample we took by the Manta-trawl consisted of a swath of Lake Superior’s surface about a foot wide and about a mile and a half long. Which means we literally just scratched the surface. We sailed on to Whitefish Bay where we spent the night before sailing on the next day through the Soo Locks to Sault Ste Marie. But that’s another story.

Oh, and in case you were wondering, the answer is yes, there are microplastics in Lake Superior. The following are pictures Amanda took of some of the microplastics we found using a small Wi-Fi Digital microscope I have been experimenting with.

Frank Simkins began volunteering for ISEA in 2012 after a career in sales. He has a great passion for nature and kids as exhibited through his years as a Boy Scout leader. He has a Bachelor’s Degree in Business Marketing and earned his Michigan Master Naturalist Certificate through Michigan State University. He is an active member of the Adams Chapter of Trout Unlimited and The Watershed Center stream monitoring program.  As a life-long fisherman, Frank’s fish expertise is an asset to the organization. His thirst for knowledge has led him to learn (and teach) all stations as well as become a lead instructor and crew member. Frank has also written a blog post about sailing under the Mackinac Bridge on the schooner Inland Seas.