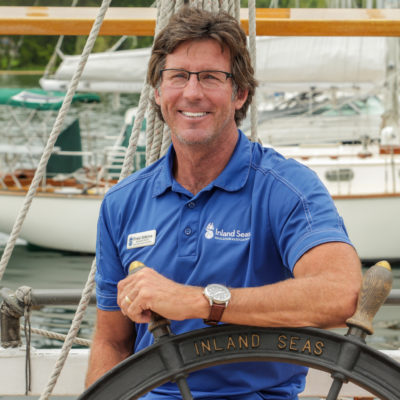 Fred Sitkins became our organization’s second executive director in 2013, but he was involved with ISEA during its infancy in the ‘90s. Before we had a ship of our own, we chartered the tall ship Malabar, which Fred helped crew! After receiving his Bachelor of Elementary Education and Masters of Educational Administration, Fred went on to become a teacher and later the principal at Boyne City Elementary. It isn’t often that someone has the opportunity to see his or her life come full circle, and Fred is excited to be at the helm of ISEA after it inspired him so early in life.

Outside of running the organization, Fred enjoys spending time with his wife and two sons playing hockey, fishing, sailing, and mountain biking. 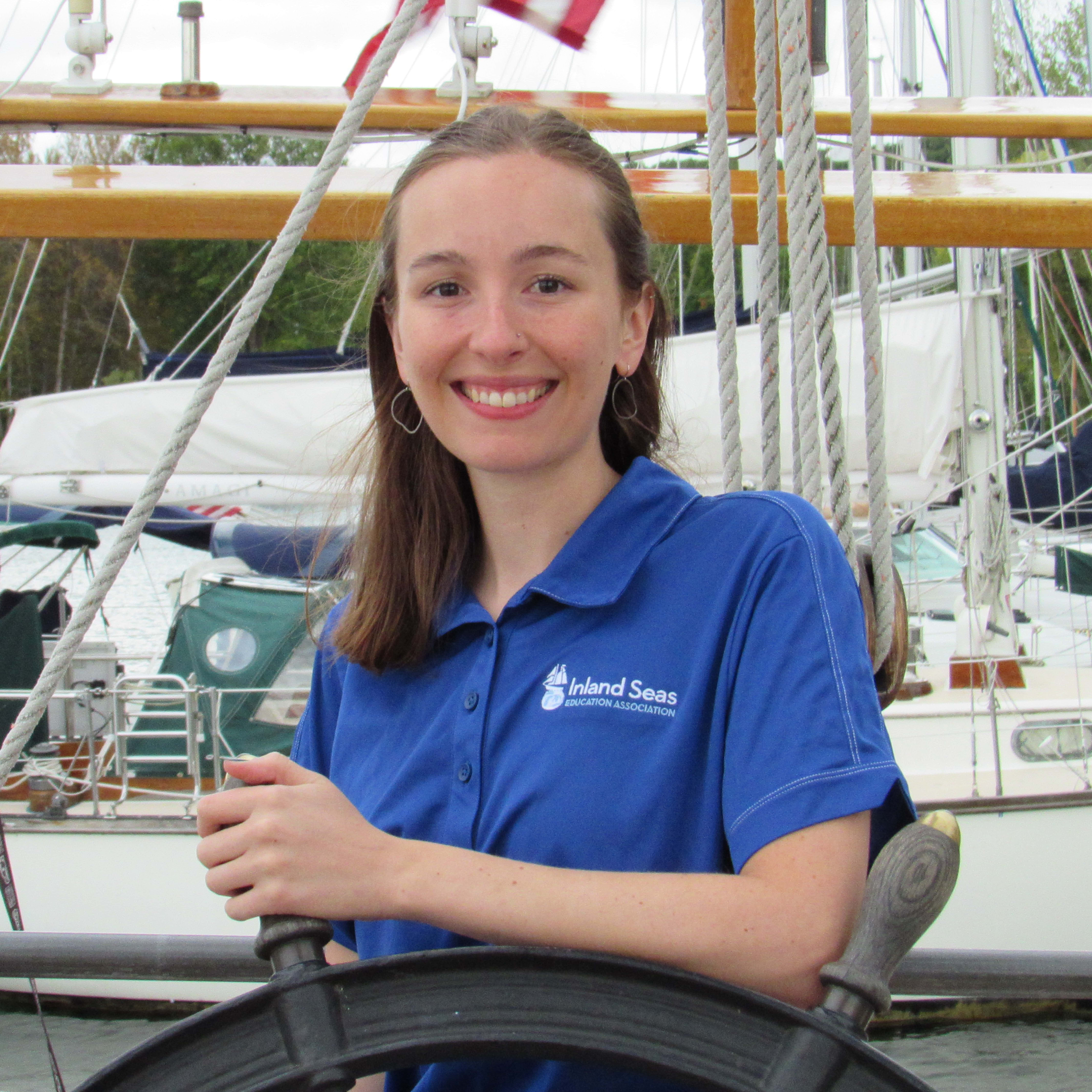 Izzy joined the ISEA team in 2021. Born and raised in Traverse City, Izzy has a deeply seated passion for the Great Lakes and is thrilled to be part of a community that cares about instilling that passion in others. Izzy holds a Bachelor of Arts from Michigan State University where she studied Arts & Humanities and Natural Resource Management. Prior to joining ISEA, Izzy worked as the director of a summer camp on the shores of Lake Michigan.
Outside of work, Izzy enjoys exploring new trails with her dog, throwing pottery and baking pies and other sweet treats. 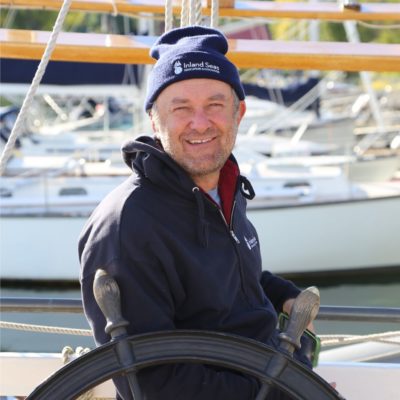 Ben was one of our early interns in 1997. After receiving his Bachelor of Zoology, he helped crew and sail tall ships in not only our Great Lakes, but in the oceans as well. Ultimately, Ben came back to join our staff in 2012 because he believes in our mission of protecting the Great Lakes through education.

After a long day of captaining our schooner Inland Seas, Ben goes home to his wife and son (a practical carbon-copy of Ben, we’re sure!) and daughter to relax and play the fiddle. 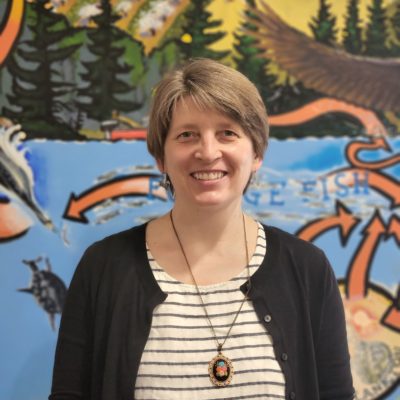 Kate moved to Traverse City in the fall of 2021 and is excited by ISEA’s mission. She has lived in a variety of places but has deep connections to Michigan, including many years of visiting grandparents in the Upper Peninsula. Curious by nature and with a Bachelor of Science degree from Michigan Technological University (1988), she looks forward to learning more about the Great Lakes from ISEA staff, volunteers and students.

Outside of the office, Kate loves hiking, exploring parks with friends and family and making and appreciating art. 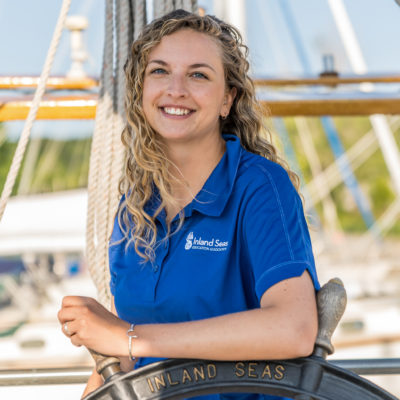 Juliana joined ISEA in 2019. Growing up in Leland, MI, she spent many hours in, on, or around the Great Lakes and is excited to return to her northern Michigan roots. Juliana received her Bachelor of Arts degree in Environmental Studies from Denison University and her Master of Science degree in Environmental Behavior, Education, and Communication from the University of Michigan School for Environment and Sustainability. She brings her past experience in the non-profit sector, environmental education, and coastal communities research to her job at ISEA.

Outside of work you can find Juliana exploring the outdoors through hiking, canoeing, and growing vegetables. 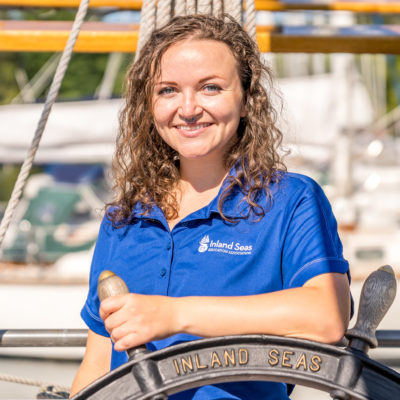 Rachel earned a degree in natural resources management with a biology minor from Grand Valley State University in 2017. A year later she worked with Inland Seas as a Schoolship Education Intern. ISEA offers a unique opportunity to marry her knowledge of science and love of theater; the best sails come with a bit of dramatic flair! She is passionate about protecting the Great Lakes and inspiring the community to love our grand freshwater feature.

During her free time, you can find Rachel flipping her fins as a mermaid in the bay. She also enjoys chilling shore side cozied up with a book and her black cat. Trisha Smrecak (Smer-jack) grew up in a rural farming community in the Tri-Cities region of Michigan with a family that believed strongly in community involvement. After completing a master’s degree in geology, she worked as an informal educator and grant manager at a museum in Ithaca, NY focusing on climate change and evolution. She fell in love with outreach and earned a PhD at Michigan State University to further her ability to reach folks with science and education. After traveling much of the eastern US with her spouse and pup (including a very long hike from Georgia to Maine), she joined the Inland Seas team in 2021. As a paleontologist, Trisha brings a knowledge of Michigan’s ancient seas and the creatures who inhabited them, as well as her experience in environmental education and curriculum development, to Inland Seas.

To find Trisha outside of work, look for her backpacking the North Country Trail with her husband, toddler, and dog. 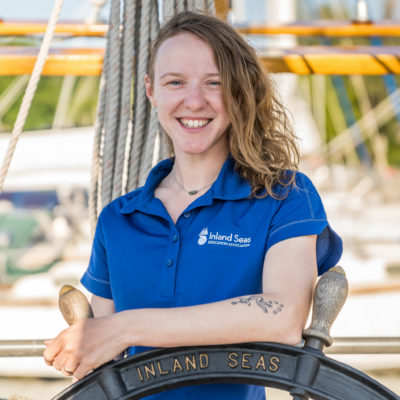 Jillian first joined ISEA in 2017 as an education intern. She is a Great Lakes native from Milwaukee, WI and is the product of urban place-based environmental education programs. A memorable week-long trip to the Bahamas aboard the S/V Dennis Sullivan in high school led her to the physical sciences, a BS in geology, and eventually, a Master’s degree in geology from the Large Lakes Observatory in Duluth, MN. She is excited to share with anyone who will listen to the joy of what makes large lakes special features on the earth.

When not discussing geological processes or the limits of human exploration with colleagues and students, you can find Jillian with her husband grooving around town or up in the air, quite literally. She recently spent the last few years learning the joy of circus arts in Madison, WI with training in trapeze, aerial silks, stilt-dancing, and acrobatics, as well as clowning and juggling.