July is here and for Inland Seas that means our schooner has set sail for the next 46 days. The ship will sail through Lake Michigan, Lake Huron, and for the very first time, Lake Superior. For our crew, staff, and volunteers, these days are packed with back-to-back programs, but this time is also exciting and, for some, brings new experiences in new areas of Michigan.

Thus far, the ship has traveled from our home port in Suttons Bay to Charlevoix and from Charlevoix to Hessel in the Upper Peninsula. As an intern, this was my first experience on the schooner outside of Suttons Bay and the expanse of water in all directions was breathtaking.

After a long day of sailing, we could start to see the Mackinac Bridge, signaling that we were nearing our cross into Lake Huron. To my surprise, over two hours passed from the moment the towers started to come into view until we crossed underneath. For a novice sailor, time seems skewed and distance seems misleading out on the water. Even with clear skies, passing vehicles were not visible with the naked eye until the ship neared the bridge.

The schooner frequents Hessel every year around the Fourth of July so many of our crew members and instructors are very familiar with the Mackinac Bridge. One volunteer, Bette Jackson, has had many unique experiences with this famous structure. Her first interaction with the bridge was participating in a run with Governor Jennifer Granholm as a way to kick off the annual bridge walk. She had submitted her name and was selected as one of 300 runners. Years later, she was one of many to buy a lottery ticket in hopes of winning an opportunity to climb the towers on the bridge. Her name was once again selected, and she was able to experience the bridge from an entirely new vantage point. The timing was perfect as her climb coincided with Inland Seas’ voyage under the bridge. Bette recalls the day being cloudy and foggy, and from her height, the schooner appeared to be the size of a thumbtack. This season, Bette was able to join us on the sail from Charlevoix to Hessel to bring her experience with the bridge full circle. As Bette sailed underneath the bridge for the very first time, she commented, “Been over it, up it, and now under it.”

Bette, along with many other volunteers, recall the construction of the bridge and its opening in 1957. This structure, however, was not the first pathway connecting the upper and lower peninsulas. Long before the bridge was built, an aquatic highway connected the land masses and ferries carried passengers and their vehicles across the Straits of Mackinac for thirty-four years. This was revolutionary at the time as “the Michigan Department of Transportation was the first and only agency to own and operate a ferry system that in effect became a highway over water” [3]. Ferries have become a widely used mode of transportation but their usage on the Great Lakes in the early 20th century was instrumental in shuttling people between the two peninsulas. Between 1923 and 1957, the ferry service carried 12 million vehicles and over 30 million passengers between Mackinaw City and St. Ignace [3]. Ferries are still used to transport passengers to and from Mackinac Island. 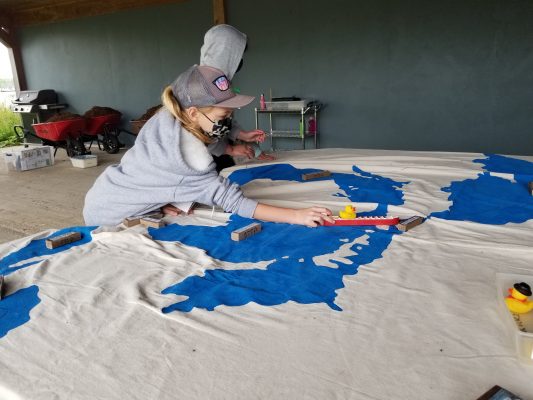 For one of our Great Lakes educators, Rachel Ratliff, this was her second time sailing under the bridge. In reflection of her experiences, she remarks, “It’s interesting to see that the only thing that separates the two lakes is the bridge. Huron and Michigan are the same elevation, the two lobes just have different names for navigation purposes. When driving over that bridge you’re on the people’s perspective, but when sailing under it, you’re on the lake’s perspective.”

The Tip of the Mitt Watershed Council further explains the concept Rachel introduces, “Since Lake Michigan and Lake Huron are connected by the Straits of Mackinac, they are considered one lake hydrologically” [2]. We were able to explore the geography of the Great Lakes with students during our ship and shore programs this past spring, and the interconnection of the lakes and the river names are often a new topic for students. The lake system is fascinating to study as “The Great Lakes are connected by close to 5,000 tributaries: a series of smaller lakes, rivers, streams, and straits flowing into larger bodies of water… covering a watershed area of approximately 520,587 square kilometres (or 201,000 square miles)” [1].

To briefly follow this system, Lake Superior is connected to Lake Huron by the St. Mary’s River which then, as previously discussed, is connected to Lake Michigan by the Straits of Mackinac. Lake Huron flows into Lake St. Clair via the St. Clair River, and Lake St. Clair is connected to Lake Erie by the Detroit River. What some people might not know is Niagara Falls is actually part of this system as Lake Erie flows into the Niagara River, over the falls, and into Lake Ontario. Ultimately, water from Lake Ontario flows into the Atlantic Ocean through the St. Lawrence River. What a magnificent system of fresh water! According to the Great Lakes Guide, it would take 200 years for a drop of water that begins in Lake Superior to reach the Atlantic Ocean [1].

Inland Seas is grateful for the opportunity to share our programming and inspire stewardship all across this Great Lakes system. We have another month of out-of-port programming ahead of us so stay tuned to learn more about the relationships we’re building with partners around the Great Lakes and for a deep dive into life aboard the ship!

This blog was written by Christina Javorka, 2021 Marketing and Communications Summer Intern for Inland Seas Education Association. Christina is studying marketing and fashion retail at The Ohio State University. Being from the Chicagoland area, Lake Michigan holds a special place in her heart. Her favorite thing about the Great Lakes is finding the treasures hidden within and telling others about them.